How can we program Mobile Phones etc in a learner-friendly way? - Part 2

New Year's Day 2017.
Back home with all my computers for the last 3 days. Continuing the search for a learner friendly way to program those phones. Finding some (mostly) good frameworks and methods.

In Part 1, I was critical of Apache Cordova. On visiting the "PhoneGap" site: http://phonegap.com/
I find that I am not alone with these concerns. And PhoneGap offers some answers.


"PhoneGap Build takes the pain out of compiling PhoneGap apps. Get app-store ready apps without the headache of maintaining native SDKs. Our PhoneGap Build service does the work for you by compiling in the cloud."


PhoneGap have downloads for:

"Desktop App" was a straightforward install.
"Install our mobile app" took longer. The version in the "Google Play" store would not install. There was an error message that my phone was not supported. Google search on that led to the GitHub site with developer notes that this often happens and I could download directly from GitHub.
https://github.com/phonegap/phonegap-app-developer/issues/408
That download did install OK.

It took me a long time to work out the relationship between the "Mobile App" and the development computer "Desktop App". Not the usual USB cable relationship. The "Desktop App" runs its own mini webserver for testing. The Desktop App also creates a zip file of the current project which the "Mobile App" needs to download from the Desktop App mini website. It then unzips this as a set of temporary files and feeds them into its mobile browser component with additional Cordova functions available. This means setting up the USB cable as a mini network between the 2 machines.
I found this as a switch-on setting in:
"Settings" -- "Wireless & networks" -- "More" -- "Tethering & portable hotspot" -- "USB tethering" 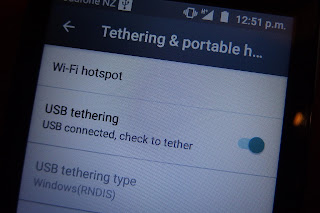 The "Desktop App" (also for laptops!) does not provide any kind of coding editor. I used "Microsoft Visual Studio Community Edition".

Compared to the base Cordova, PhoneGap does provide an effective fast-to-start test run on the Phone. This test run is marginal as a practical run in the field like in a moving car. Because to run an app Phone-Alone we would need to start the run with the USB cable connected, then disconnect the cable and do the test run. The test app seems to disappear from the Phone at the end of the test run.

The "cloud compile" reads as an excellent idea. I have not tested it yet.

Using the checklist from Part 1

System: Crosswalk by Intel
Looks good reading about it but I was not able to get it to work.
I think there are 2 variations of this. The newer version is a claimed improvement to Cordova mainly by replacing the standard Phone browser component with a better "Crosswalk" component. I was more interested in the older version where "Crosswalk" is an independent system, similar to Cordova but more straightforward. I tried to install on 2 machines. Both gave me error messages that I did not have the Android Softward Development Kit available. But other frameworks I am testing eg Android Studio have previously installed that.

This is a very well packaged and documented JavaScript interpreter and a strong candidate for leading package. Rob Bowman has used a Mozilla component to run JavaScript code and given it a well thought out Device API some of which I understand he has written in Java to simplify interfacing with the system. "ScriptIt" includes a capable code editor. I quote from my Part 1 article: "Bring back the educational glory days of the "Sinclair ZX81" and the "Commodore Pet". Well this can! We can edit JavaScript files on the Android Phone or Device. We can also copy scripts to a desktop or laptop and edit with tools like Microsoft Visual Studio.
User Interfaces are achieved by calling to the "native" Java methods so there is no HTML or any other markup language. That could be a challenging learning curve for beginners. Rob Bowman has worked on getting around this with example code examples, snippets and UI starter kits.

Running "ScriptIt" through the checklist - and I can for the first time include the "would be nice" extras of point 6 and 7.


System: Direct use of Google Chrome
The system that is not an added framework at all but is simply about using the browser that is already on the phone with HTML, CSS and JavaScript. There are some helper Apps that may be useful.

During my extensive Google searches and online reading, I began  to get some hints that the Google Chrome browser already on my phone might be more capable of phone interfacing than I had realised. So I started an experiment in placing a website in a folder on the phone and running it directly from there with Google Chrome.

The simplest approach is to type a file address into the browser.
eg Under "Internal Storage" aka "Phone" I have a folder "devc" with subfolders for each website-app.

I start app "test09" with this URL address:
file://sdcard/devc/test06js/index.html 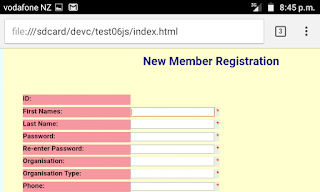 Note - strange that the internal storage has an "address" of "sdcard" in this phone. The phone also has an SD-Card but that file address looks quite different being a code that looks like a serial number.

I have also downloaded a Play Store App "Tiny Web Server" which has a file browser to find the web app folder, The Google Chrome address then becomes:
http://127.0.0.1:8080 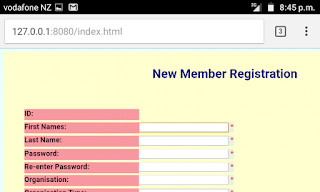 This has advantages because Chrome recognises it as a "full" internet technology website. For example Chrome can remember permissions we have granted previously.

Another useful optional extra is a Play Store App "DroidEdit" which enables code editing on the phone.

By default, web browsers like Google Chrome are designed to give low trust to website code because of its origins on distant machines. My tests so far show that code originating from on the phone by both methods seems to be more trusted with a default setting of asking the user for permission via an on screen prompt. It does appear to be possible to "train" the "localhost" address http://127.0.0.1:8080 to remember permissions by pointing it to a test app that requests lots of permissions.

More testing to do but Google Chrome, with "Tiny Web Server" and "DroidEdit" is looking like a good candidate especially for beginner learners. We can create "Apps" as websites which almost exactly follow standard website coding. Coding for Phone Features involves only some new keywords for use in the same kind of JavaScript coding. Other systems will be needed when we get more ambitious eg publishing to other people. Now for that checklist:

General Phone Notes
Some general discoveries and observations about Android phones, and maybe phones in general.

SDCARD - "Internal" or "External"?
Based on my experience with adding memory card storage, when given this option I went for "External". This is the setting where the card holds optional extra data and can be removed and read on another machine. The alternative "Internal" is where the card adds to the Phone/Device becoming part of the Phone and should not be removed.
I am now changing my mind and recommending "Internal". My reasons are:

Android Phones and Security - care with where Apps and Code come from.
Here is an instructive story from Rob Bowman, creator of the fine "ScriptIt". Share this with your learners - I will.

Viruses and malware are a real problem. Using trusted-app-stores like Google Play and Amazon Appstore reduces exposure to these threats by the app-store aggressively testing, reviewing and scanning for malicious apps.

What about the other app-stores?

Recently, I found ScriptIt on untrusted-app-stores. Since I didn’t release to these app-stores, it means someone downloaded from a trusted-app-store to an emulator/device, extracted the ScriptIt-APK and uploaded to their site.

Being curious, I downloaded this untrusted-ScriptIt-APK inside a sand-boxed environment and determined the app had a rootkit that obtains control over the Android operating system, collects vital information, and is very hard to remove. Next, I downloaded other well-known Android apps and they each had the same rootkit embedded inside them.

The important lesson is always use a trusted-app-store.

Rob Bowman supplies "ScriptIt" for free on the official Play Store so there is no need to download illegal damaged copies from anywhere else.

This is Part 2. You can read Part 1 at:
http://hitechfromlotech.blogspot.co.nz/2016/12/how-can-we-program-mobile-phones-etc-in.html

Posted by iafilm at 2:02 AM No comments: