The Challenge - from our previous exciting episodes, the "weight allowance" for construction is est 134g.

Idea? - use an old smartphone Vodafone 858 that is smaller than number one tester - a current Vodafone VFD-300. 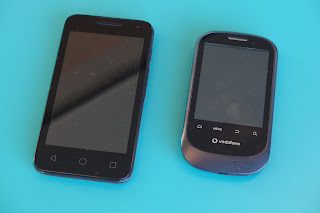 The Mocket - design - "top heavy" is good for rocket stability

"The Mocket" is a model rocket in shape and appearance, but the motor in the tail is an electric "fan-jet". Similar thrust source and direction can get us started on flight control problem solving.

The current plan is to place most of the weight eg battery, mobile phone, into the head and have a mostly empty middle section to get the height up to 1m. Why weight at the top - isn't that top-heavy? Why give it extra height - wouldn't it be better to make it shorter to save weight?


In this video, John compares this with balancing a 1m rod on his finger. Adding the weight of a mobile phone at the top gives more stability because of inertia and leverage effects.

Note that The Mocket will not have tail fins because (1) it will not move fast enough on the way up to be able to use air pressure as a stabilising force, (2) it has fold-out "head fins" which act as air brakes on the way down and tail fins would work against these.

One of the many experiments for The Mocket is to try to keep it on a straight-up course by angling the motor, rather like a finger balancing a 1m rod. And rather like a SpaceX Falcon 9.

The Mocket - Mock Rocket - here's looking at you SpaceX Falcon

An Educator's approach - "staircase" - with early test vehicles which test parts of what is needed and perform less ambitious flights and ground tests as we work towards this grand aim, learning a lot along the way - which is the real payoff here.

Enter - "The Mocket" or mock rocket.
Idea - it looks like a rocket, but the motor in the tail is an electric "fan-jet". Same position, same thrust direction, similar moveable mount and controls as what a "real" ie not-atmosphere-dependent rocket motor would need. We can get started on phone-sensor-based flight control because "The Mocket" is easier to work with and has less in the way of flying permission issues than the possible later rocket. 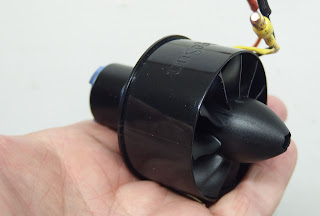 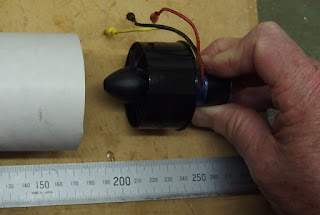 Question One  - do the core components add up to well under 510g?

Assume for a reasonable climbing performance we need a total weight of 400g, this gives a "weight budget" of 134g for structure, wiring, other needs arising.
Challenging but good enough for a go-ahead.

Note - The mobile phone weighs 103g but it is possible to remove its battery (28g) and run it from the 5V "BEC" power supply provided by the ESC = Electronic Speed Controller. That gets the phone down to 75g.

Posted by iafilm at 1:32 AM No comments:

Robotics experiments continuing. I have started by powering "Creative RAT" (Youtube Video Here) with a common 9V battery but it goes flat after only a few minutes of demo. Time for something rechargeable and better. Next up is to try changing to a 7.4 Volt "2S" (2 cell) LiPo battery as used in Radio Controlled model aircraft. These have an excellent power capacity but they also carry a risk of catching fire and melting down if overcharged or undercharged so we need to regard them as "prima donnas" needing much loving care and attention. My first 2 "Wild Scorpion" batteries cost 10 NZ dollars each but they need a support infrastructure!

Storage. In a special fireproof "LiPo bag". I am keeping this bag on a steel shelf by a brick wall.

Max voltage when charging is 4.2 V per cell. For LiPo batteries we need to buy a special charger which "balance charges" each cell individually and gives an optimum charging sequence of voltage and current over time.


ISSUE! PROVIDE A CUTOFF
Low-cutoff voltage recommended by "HobbyWing" is 3.15V [1].  Others say 3V. The battery is at risk if it falls below that. This is a big issue for us because Quadcopters etc all have "ESC" (Electronic Speed Control) units with cutoffs. We are doing speed control differently so we need to provide the cutoff.

I am starting with a small unit that sounds an alarm at 3V for any cell. [2]
This is a warning beeper rather than a cutout but when I get this I plan to investigate the power supply to the beeper to see if it can power a relay or trigger a MOSFET for cutoff. I am also calculating and sketching possible diy cutoff circuits.


POSSIBLE ALTERNATIVE
One of the aims of this project is to find ways and means that can work well for getting teenagers interested in tech - as well as being do-able in places like School Science Labs and after school workshops. I am guessing that the special care demands of the full-on LiPo are a heavy responsibility "turn off" for these situations.

Point and shoot cameras use efficient rechargeable Lithium batteries, single cell, 3.7 V
They should have less critical care needs because the battery includes an electronic module which includes a cutout. Can these work as our robotics batteries?
[NOTE LATER - Tested 2 such batteries - one is working well, the other "died" under test load. Therefore it looks better to follow common practice for radio controlled model cars and use NiMH batteries.]