The "Rat" has become difficult to control in the last 3 weeks. It has the common mini wheeled robot setup of 2 x yellow plastic motor-gearbox units - one on each side with direction controlled by running them at different speeds. In the last 3 weeks it has become impossible to run forward in a straight line but it is OK in reverse. We have put in a lot of time on detective work and researching more complex designs.

I tried replacing our simple H-Bridge analogue power circuit with a more complex digital solution involving an Arduino Nano microcontroller giving PCM outputs from our screen light patch LDR circuits as analogue inputs. That gave even more random out of control crazy movement. And the power amplifier board gave an unpleasant noise from the PCM frequency even with motors disconnected. [EDIT - LATER 28 Oct 2017 - discovered the need to use "float" when doing some of the calculations on analogue inputs - this Arduino Nano solution is now looking better. The unpleasant noise issue remains.]

I also looked at


Suspicion then fell on the motor-gearbox units. The left one did feel harsh and rough turning the wheel to spin up the motor compared with the smooth feeling of the right one. But why would it be OK in reverse?

I bought 2 new units and swapped them in. The "Rat" was controllable again. Repaired! Hooray!

I then investigated the old units. I replaced the motors thinking maybe we had given them too much power and done some damage. The motor swap is relatively easy because the motor is only held in by an elastic plastic strap held by 2 hooks. That made no difference, the left hand unit was still harsh. I inspected more closely and it felt difficult to push the left motor into place while it was smooth to push in the right motor. So I pushed the left motor cog about 1mm along its shaft closer to the motor body. Smooth action!

"Slip a cog" is an old school metaphor for technology going wrong. But in the case of our robot that literally is what happened! I hope it is useful to share that this very common unit can develop a harsh drive problem and adjusting the cog position on the motor shaft can fix it. 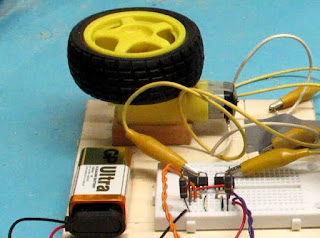 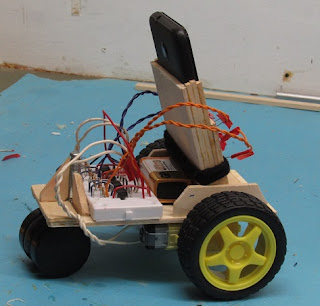