Snake Robot does Dancing in the Dark

This relates to efforts to save NZ native bird life from introduced predators like rats, possums and stoats which are a mis-match to our ecology.

There is a story going around the internet about snake robots. Here is the wikipedia version:


Also, snakebots can be used by animal control officers to subdue rabid or invasive creatures. Raccoons, barn cats, and large rodents typically respond to the snakebot's presence with attacks upon which the snakebot will emit an electrical shock and paralyze the aggressor. (retrieved from: https://en.wikipedia.org/wiki/Snakebot)

The sources, which include at least 1 academic journal article:
(http://ijetsr.com/images/short_pdf/1522048019_1217-1222-oucip927_ijetsr.pdf)
appear to be quoting each other. I can find no first hand experience stories or other evidence for this.

There are 3 claims here:

Focussing on (2), can a snake robot attract pest attention? If this is an instinct for some animals, would they still have it after many generations in NZ with no contact with snakes? I am a practical person so late at night on the 16 Mar 2019, I was out in the bush with my snake robot and equipment to try to find out.
In brief: The result is inconclusive. No predators attracted but I was only able to get the snake robot running alone for 10 minutes.

Lots of problem-solving to get out there. It was a close decision to go ahead but it was good value as discovery of what the snake robot needs to do better.

Note - I am describing and naming products that worked well in this particular situation. I have no promo connection with their makers or sellers.

Where to put the Snake Robot?
I had access to a bush area north of Auckland. I found a dried up creek with a waterhole and I selected an earth bank above that as a good area. Later I got advice from a local farm manager who recommended the same place. I placed a "Trail Camera" there 2 weeks before the grand experiment and results from that showed possum activity. Here is the reconnaissance highlights video:

A Snake Robot needs Snake Skin
Showing off the snake workings has been good value for public demos, but it will not do for out in the bush. I asked my daughters about hosiery and they recommended heavy opaque pantyhose. Well done! I can report that "Columbine 50 denier (heavy) opaque pantyhose Mocha small" that I bought from the Farmers Trading Company was good value for both flexibility and protection. 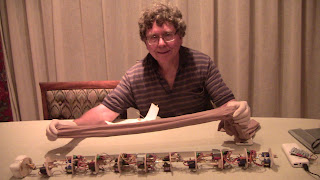 Monitoring Cameras
The "TechView 720P Outdoor Trail Camera" bought from "JayCar" - NZ 169.00  Cat.no: QC8041 - had a success rate of 19 out of 26 trigger events in 2 weeks, ie 73 percent which is better than I expected. I set up its timer to record from 6:30pm to 6:30am ie at night with a little evening and morning. The highlights video above is from this camera.

This "spotlight" did well at adding more infra red illumination, especially for the next item.

I dragged out an old Sony Handicam Video Camera of circa 2001 vintage. At that time Sony used CCD sensors which have good infra-red sensitivity and they had a "Nightshot" setting including an infra-red spotlight. Similar result to a trail camera but with the advantage of an optical zoom lens. I positioned myself 25m away and used this as my night vision to watch the test site.

SmartPhone as infrared monitoring camera?
In earlier trials at home I found 2 x smartphones that appeared to have some infrared sensitivity. This suggested the possibility of a wildlife monitoring camera with remote monitoring capability. However in these real bush conditions they were not sensitive enough. I have since tried finding and removing the "infra red cut filter" on an old phone but that only resulted in my breaking the camera. [UPDATE 30 Mar 2019 - tried this again on a Vodafone VFD-300  - found the infra-red-cut-filter in the back of the lens, broke it out and ... success - it is now an effective infra red camera. It has also gained increased sensitivity as a visible light camera although with false colours.  New blog post about this:
http://hitechfromlotech.blogspot.com/2019/03/smartphone-vfd-300-as-infra-red-camera.html]

Needs remote control
I was watching from behind a large tree about 25m away from the snake. That was too far for remote control by bluetooth which was losing contact at only about 7m so I had the snake idling which gives a small "jiggle" movement. On the TODO list is to combine our open source software projects "XMSnakeRobot" and "XMRemoteRobot" to give long distance remote control over mobile data. As in run the snake robot and cameras from the farm house, which would get me well away from target animals which may want to avoid me.  I have made good progress on that in the last week.

Snake Robot needs an external power supply for this experiment
The snake robot runs on internal model aircraft lithium batteries which give it independent untethered movement - this seems to be a rare capability for existing snake robots. Sessions are limited to about 45 min indoors."In the wild" it only ran 10 min before the back battery ran out - I think the tail hit some real life outdoor resistance like digging into the dirt. I did try running from a "powerbank" but the current draw had peaks that were too high, often triggering the powerbank cutout. On the TODO list is to try running from 2 x powerbanks which may work because the front and rear halves of this snake robot are powered separately. 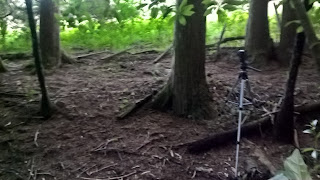 Snake Robot setup as seen by the trail camera 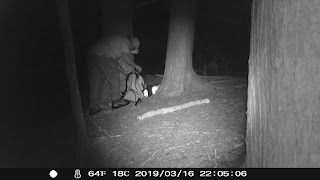 "Oldie but a goodie" - old Sony Handicam has infrared "nightshot". 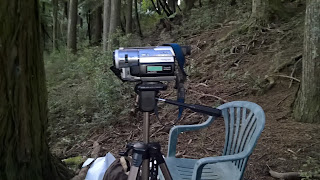 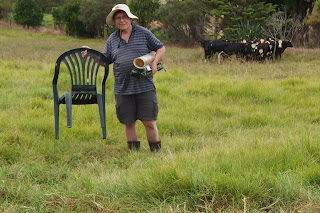