My common robotics architecture is:
Android Smartphone in the role of "Robot Brain" communicating via Bluetooth to Arduino MicroControllers in the role of "Spinal Cord".
I have done some experimentation with a "Raspberry Pi Zero" as an alternative "Robot Brain" and I revisited that today. I have setup and run the "Pi" for remote-control with VNC using "Pi Bakery":
https://www.pibakery.org/
which I have found to be excellent value. "Pi Bakery" installs "Rasbian" which is "Linux Debian" customised for "Pi". "Pi Bakery" includes additional customisation to get Pi to begin running by remote-control over WiFi or over a USB cable. No screen or keyboard required - Pi borrows your computer or laptop screen, mouse and keyboard.

Today started well. I ran my project "XMRemoteMonitor" which is a wildlife or security camera web app.
https://github.com/manukautech/XMRemoteMonitor
The functionality is all in the web app so no installation needed. I only needed to visit my  website with the built in "Chromium" browser. This does need to access the device camera. I had an expensive Pi special camera plugged in but the Web App could not find that. Then I plugged in an old general purpose Microsoft webcam from one of my boxes of old leftover tech and that worked including automatic plug-and-play recognition. All good so far, acting like any other device. The Rasbian desktop even gives me a Windows-like experience.

But then the Pi only took 27 webcam photos over about 5 min before completely freezing up. The screen was still visible and connecting via VNC but all controls were frozen. During that 5min I did get readings of 0.29 and 0.30 Amp for the current drain. This is similar to smartphone current draw when they run the same app. As a mostly Windows practitioner I have Linux friends teasing me about Windows freezing. Well! It appears Linux can do that too!

This gives me an idea for my next Pi trial. Install "Windows 10 IOT" which is a lightweight Windows 10 for small devices like the Raspberry Pi. Then run the same web app - will it go better?

Results in the web app: 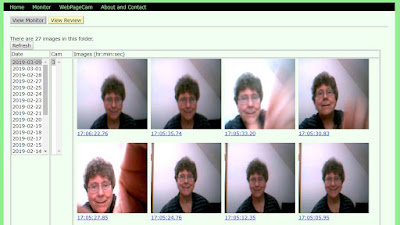 Setup. The Raspberry Pi Zero is the small green circuit board sitting on a white powerbank.
Pi has 2 x micro USB ports. The left USB is fully functional and I have plugged the webcam into it with an adapter. The right USB is for power supply only. 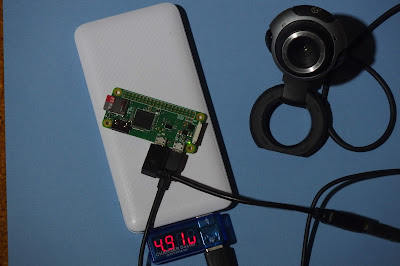